With books and databases in several disciplines of Humanities and Social Sciences, the Department Library is a rich depository of knowledge for students and faculty members. Books, journals, databases, and magazines are also available at the Institute's Mahatma Gandhi Central Library ↗ which is located beside the James Thomason Building ↗.

Department of Humanities and Social Sciences maintains the collection of several economic databases as an attempt to render its dedicated support to the students, researchers and faculties. This endeavour provides cutting- edge information for research and teaching in Economics. The list of databases includes the following:

Annual Survey of Industries (ASI) This is the principal source of industrial statistics in India. The comprehensive and detailed data obtained from ASI can be used for the estimation of the contribution of industrial sector in the State economy, and for systematic study of various structural aspects of the industry. As a continuous effort, the department has maintained the record of ASI data since 1998-99.

Indiastat.com It is a portal for country-specific, state-specific, sector-specific and region-specific, secondary level socio-economic statistical facts and figures on more than 35 variables. This online gateway includes statistics on demographics, health, higher education, agricultural and industrial production, etc. Information from specific sectors such as banking and financial institutions, companies, co-operatives, crime and law, population, foreign trade, labor and workforce, housing, media, power, and transportation are also included in this data source.

National Sample Survey (NSS) The National Sample Survey Organization (NSSO) has been conducting nationwide sample surveys on various socio-economic aspects since 1950. These surveys are conducted in the form of rounds extending normally over a period of one year. Each NSS round provides data on the state-wise as well as district- wise estimates on certain socio-economic indicators. The various rounds conducted by NSSO cover major areas such as employment-unemployment; unorganized enterprises in non-agricultural sectors; population, births, deaths, disability, morbidity, fertility, maternity & child care, and family planning; land holdings and livestock enterprises; and debt, investment and capital formation; etc. The department has kept stock of the National Sample Survey (NSS) unit-level record data till the 68th Round. Research scholars are provided individual cubicles in a shared space, located in the department building. The department buildings houses two lecture halls. Classes are also held at the Institute's Lecture Hall Complex, where the classrooms are equipped with state of the art amenities like audio and video conferencing, digital podium, laser projector, motorized projector screen and digital writing board. The department also houses a conference room for seminars and talks by students and visitors. Classes during the pandemic are being held online.

The department's computer lab has modern hardware, supported by various softwares. Students can learn various programming languages like C++, MATLAB, Python, and R. Several softwares to conduct quantitative and qualitative (e.g., NVivo) analyses are available, and can be accessed upon request. The functioning of the lab is assisted by a dedicated technical staff.

The following faculty members serve as the single point of contact for the respective softwares mentioned against their names. Request for access can be made via email to the respective faculty. 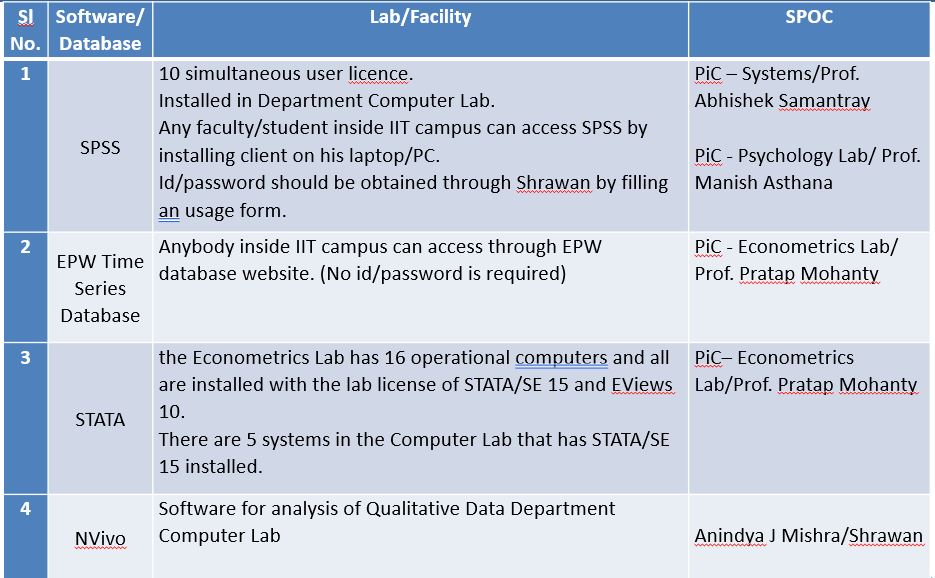 The lab is equipped with special softwares like STATA, SPSS, and others which are widely used to analyze economic datasets. These softwares are usually accessible by students when they are in the campus. Courses taught to advance the level of spoken English language skills are followed by practice sessions in which the objective is to help students reduce the influence of their respective mother tongues on their English use. The grammar and vocabulary exercises strengthen the knowledge of the language, while regular participation in extempore and group discussions ensure greater fluency. The lab's technical features facilitate such learning. Also, there are softwares on foreign languages like Chinese, German, Portuguese, Italian and Spanish. The softwares include Orell Digital Language Lab & English Edge.

Special Technical Features
There are more than 50 booths with one master console.
Latest softwares are available to improve language.
The lab is both a Computer Assisted Language Laboratory (CALL) and a Web Assisted Language Laboratory (WALL).
The master console/instructor has a computer with appropriate software for conducting English language exercises.
The computer systems of teacher and student are connected with LAN (Local Area Network) and in some cases, with separate audio cabling.
A server computer or a separate storage device is used to store lesson materials in a digital format.
To communicate with students there is a media player/recorder for listening to audio and for watching video.
Students can also record their voice to know the real impact of their communication.
Texts, images, audio and video can easily be integrated; teachers can alter materials to fit their requirements.
Learners can record their own voice and play the recordings back to know the improvement of their tone and pronunciation with the help of the teacher.
Teachers can very well control the class through console.

Future Plans
Through the lab, short-term and long term coaching for international examinations like IELTS, TOEFL and other competitive examinations can be organized.
Online courses and paperless examination can be conducted with the help of the lab.
Some of the foreign languages such as Spanish and Japanese may also be started.
We are on the track to start a full-fledged Media course for B.Tech. students through the language lab. The lab is a modest facility to conduct research and give training to the students and faculty. It was established in the year 1971 with the objective of providing theoretical and practical understanding of behavioral aspects of an individual as well as of the group. The activities involve familiarization and practice in the use of various psychological tools, software and tests, standardized questionnaires, and conducting experiments.

Currently the lab is equipped with several important measures for assessing psychological dispositions including abilities, motivation, managerial skills, personality, attitude, aptitude, interest and values. They help in preparing psychological make-up or profile of the people. Such information and inputs are extremely useful in deciphering the psychological problems of various types, providing guidance and counseling, recruitment in and selection for various jobs. The psychological tools available in the lab encompass many areas. An illustrative list of the tools used in different fields of psychology available in the lab is as follows:

The discipline of psychology provides students with the opportunity to develop an understanding of behavior andexperience from a variety of theoretical perspectives. The psychology faculty specializes in a wide variety ofpsychological topics including general, social and organizational psychology. Courses of general interest toundergraduate and doctoral students in the related fi elds are regularly offered with a pragmatic approach on developingresearch skills and understanding human behavior in daily life; enhancing relationships, well-being, businesses and theircareer.

This is a growing resource forthose intending to study human behavior,adjustment, relationship, emotion, motivation andcognition. It has a large set of more than 100 testsand facilities to conduct psychological profi ling,personality testing and various measurementsrelated to stress, intelligence, child developmentand organizational psycho-diagnostics. Variousqualitative and quantitative software such asNVivo, SPSS, E-PRIME, AMOS, MPlus are activelyused by researchers in the department. We arealso in the process of developing measurementfacilities for psycho-physiological and cognitivemeasurement. 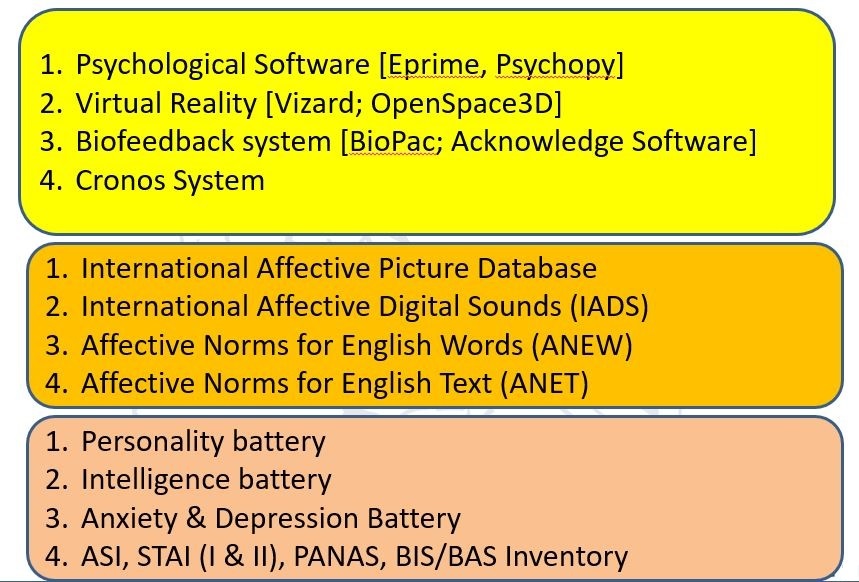 Admissions
Necessary forms, during admissions and other general purposes, will either be sent by email or be made available on the department/institute homepage (check for updates). Forms for any specific purposes can be collected from the department office.

Internships
IIT Roorkee offers SPARK fellowships ↗ for summer internships to students from IIT Roorkee and other universities and institutes.

Scholarships
The website of the Senate Committee for Scholarships and Prizes ↗ contains information on awards, scholarships, and fee waivers by IIT Roorkee.